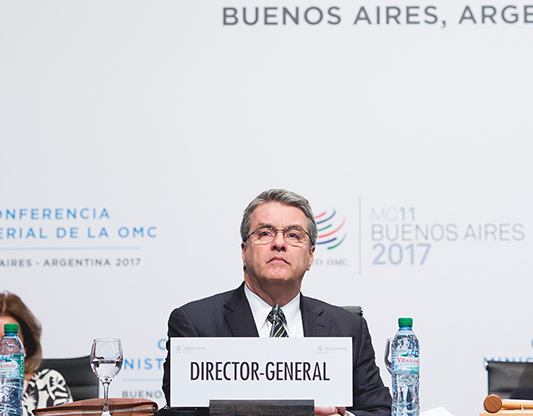 The World Trade Organization remains the backbone of the global trading system, although even modest expectations regarding the eleventh Ministerial Conference of the WTO (MC11) were disappointed. During the conference in mid-December in Buenos Aires, B20 leaders called upon WTO members to look ahead, build on the decisions taken and continue to shape a modern negotiation agenda.

Despite enormous efforts of the Director-General of the WTO, Roberto Azevêdo, and constructive negotiation proposals by several G20 delegations, the 164 WTO members failed to agree on concrete rules to limit fishery subsidies or a permanent solution for the public stockholding of food. Even the usual adoption of a joint declaration has failed at MC11 for the first time since 2009 due to a lack of consensus.

The hosts, together with B20 Argentina and other partners, held a major business forum – the first time at a WTO ministerial conference. B20 Chair Daniel Funes de Rioja, as one of the plenary speakers of the forum, urged WTO members to strengthen the rule based multilateral trading system including monitoring and the dispute settlement. At the forum, two focal points of the Argentine G20 presidency were presented: trade in agriculture for sustainable food and the participation of women in trade. Participants welcomed the launch of the “SheTrades Argentina” initiative aiming at a better integration of women entrepreneurs into the global economy.

Business delegations from many G20 countries organized and participated in side-events of MC11 in order to signal their support for the WTO process and called for a modern negotiation agenda. Overall, business engagement and recommendations were well noted. Several topics, brought forward by business, e.g. e-commerce, investment facilitation, and measures in favour of Micro, Small and Medium-Sized Enterprises (MSMEs), became part of the official discussions and were partly reflected in the decisions by trade ministers.

Only Mini Results but no Complete Failure

On fishery subsidies, WTO members only committed to agree on effective rules at the upcoming ministerial conference in two years. At the last minute, they avoided the failure to extend the moratorium not to impose customs duties on electronic transmissions. This multilateral self-commitment has been prolonged in every ministerial conference for the next two years since 1998. At the same time, a moratorium on a specific part of the Agreement on Trade-Related Aspects of Intellectual Property Rights (TRIPS) was extended.

A failure of the moratorium on the transfer of data would have resulted in new customs and duties and therefore would have caused additional burden on the world trading system. The decision also includes a fairly general plan to continue working on the topic of electronic commerce. Beyond that, an informal and open working group has been established, which is to bring about a mandate decision for formal negotiations on promoting MSMEs at the forthcoming conference. Ultimately, conditions for the beginning of accession negotiations for South Sudan have been agreed upon.

At MC11, the USA withdrew from its leadership role in WTO negotiations and countries like India and South Africa were less constructive in talks on new topics. However, MC11 reconfirmed that the WTO remains more important than ever for maintaining open and rules based world trade and to initiate new trade pacts. All G20 members must engage in a more flexible way, in order to revive the negotiating process of the WTO. It is imperative to move forward and to shape a modern multilateral trading agenda. In this regard, MC11 delivered another step into the right direction and in line with B20 recommendations: a new initiative on e-commerce, which is open to all interested stakeholders. 70 like-minded WTO members, among them most G20 members, have agreed during MC11 to hold discussions on facilitating digital trade.